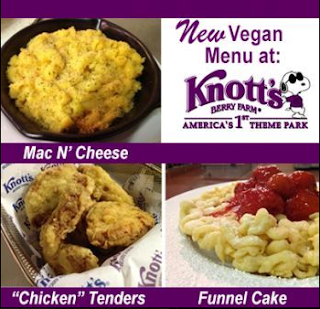 Knott's Berry Farm is now offering vegan food!!! Many vegan options will be gluten-free and soy free! This is fantastic news and a real big deal for Southern California theme parks.

We just tried their "Chicken" tenders, today, at the Ghost Town Grill and they were delish!  It was not on the menu, but my mom googled it and knew to ask for it.

I wish we had realized it sooner, because we had my mom with us, who is vegan, and I LOVE to eat vegan! We would have tried everything! We also just bought 2014 season passes because we really like this place and now I extra like it.

Here are the vegan and gluten free offerings:

Ask for the vegan food everywhere, at the park see what comes up, and let me know...