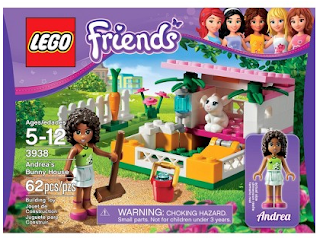 My niece just left after staying with us for a couple weeks and we spent some time at LEGOLAND. I found out that she loves LEGO Friends. It inspired me to find all the sets that were made last year, so we could make a checklist (and maybe make sure to get them all while they are still around... MAYBE!)

2012 marked the year that the LEGO company finally put out a line of toys that specifically appealed to girls without stripping down the creative integrity of the play system, so I decided to start there...

Did you get all the LEGO Friends sets from 2012? Most of them are still available at LEGO.com.


LEGO Friends 2012 Checklist
(the one's with links will be available on Amazon.com)
First round released:
Olivia's House 3315

LEGO has typically been known as a boy's toy for the past 40 years or so. A few girls, here and there, have been able to piece together enough LEGO to make something like a LEGO dollhouse, but up until this point, it hasn't been easy.

LEGO Friends came along with dozens of sets in the line that interests young girls who were eager to engage in creative play. The old square minifig was replaced by these adorable little doll figures. Cute hedghogs and puppies join the collection of LEGO parts as well as colors like lavender and sea green. 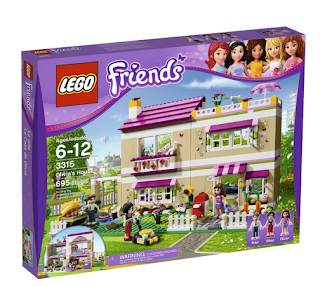 The BIG set from the new LEGO Friends line is Olivia's house. LEGO Friends Olivia'a House is a REAL dollhouse with adorable furniture that your child can handcraft out of the small, colorful pieces.

I would buy 2 if I could afford it, and build a mansion with some extra parts I could pick up at a LEGO store!

You will need some extra brick, probably some smaller pieces in tan to customize this house with your child.

Did you know that LEGO Friends stirred up some controversy when it was released?
So after years of market research done to understand what little girls want to play with, the LEGO company came up with this very girly line of products and curvy little "Ladyfigs" that are a few plates taller than the "boy's" LEGO minifigs.

I personally LOVE the new sets, colors and parts that are included. The new "Ladyfigs" are very attractive, HOWEVER, I liked the LEGO minifigures just fine, before. There is one man in this girly land - Olivia's dad. Where are the other fathers, brothers... husbands? This becomes a very strange way to play house, in my opinion. Maybe someday they will make some cute boys, babies and kids, too.

Regardless, they are still the best sets, yet, for girls or boys that want a little more cutesy, flowery, and puppies and rainbows out of their LEGO.

If you want to DO AWAY with these amazonian ladyfigs altogether, purchase a LEGO Minifig Series 7 Bride to marry your minifig fireman, as long as he is not smitten with one of these new chicks. They will gladly move into Olivia's house, together and probably start a family (now the LEGO company really needs to think about THAT! Baby Minifigs would have made me so happy when I was a little girl...)
at Wednesday, June 26, 2013