We Will NEVER Forget

Back when I was managing the Miniland New York City project for LEGOLAND Florida, I had one of our top designers recreate the Ladder Company "10 Truck" to make sure that we paid homage to those that lost their lives, gave their lives, became heroes or lost loved ones on Sept 11, 2001.

The real 10 truck was built for the 10 House, the only fire station inside Ground Zero and the first to respond to the terrorist attacks on the Twin Towers 11 years ago. They not only lost their fire truck in the tragedy, but 5 of their men, too. Their fire house was commandeered by NYPD and their beloved truck was buried deeply under 40 feet of rubble.

What did that leave these firefighters to do without a house or a truck? These men spent 160 days in the pile of the collapsed towers in rescue and cleanup efforts before they got the first truck off the line from Seagrave Fire Apparatus, painted lovingly with the American Flag.

Here is the beautiful story of these firefighters and their truck:
Amazing grace: Fire truck built in Clintonville by Seagrave Fire Apparatus embraced by FDNY Ladder 10


Here is the LEGO version built to honor them. 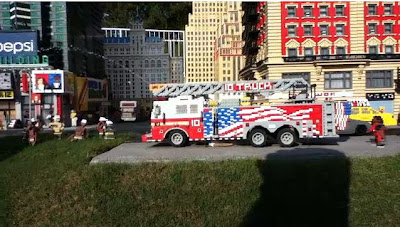 Watch the LEGOLAND 10 Truck Video HERE where you can see the hose shoot water and hear the sirens.


Thank you to amazing people like the firefighters of 10 House that protect us all. Now they can protect the little LEGO guys in Miniland, too!
at Tuesday, September 11, 2012