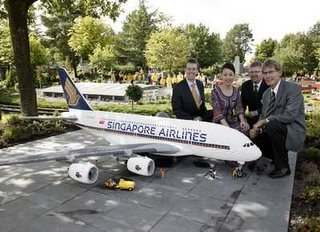 Using over 75,000 LEGO bricks in eight colours, the world’s largest Singapore Airlines LEGO aircraft model took the entire team of professional LEGO model builders at LEGOLAND more than 600 hours to construct. It is currently on display at “MiniWorld” in the main LEGOLAND Park.

The model retains the dimension, scale and design of an actual Singapore Airlines A380 aircraft. Measuring 2.9 metres in length, it has a wingspan of 3.2 metres and stands at one metre. The total weight of the model is 125 kg, including 100 kg of LEGO bricks.

I'm not sure which one of the Model Builders in Denmark built this awesome plane, but it looks great! Good job guys!
at Saturday, September 16, 2006