Our 3 SF Finalists on air with the anchors and Pat and Julie: 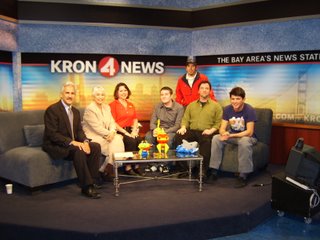 Jarad won our mini-competition! (like the little trophy I built? - fun project!) 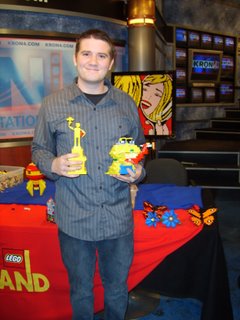 Bryan with his model: 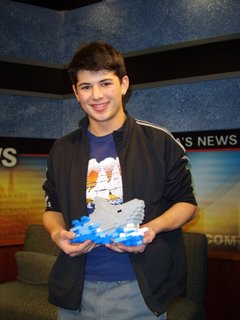 Jeff said he's into Lego space stuff so he built a spaceship: 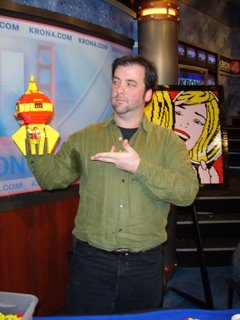 Just wanted to post something about the build-off we did with the 3 San Francisco finalists.

Anyway, Jarad Barkdoll, Bryan Blanco and Jeff Cross joined me, Pat and Julie at the KRON station on Sunday 3/12, first thing in the morning. We set them up at a table to do a build-off (1 hour, whatever they wanted to build) and all three made awesome LEGO sculptures.

The three Finalists got to sit down with the anchors and chat, and they looked great on camera! They were asked if they were married and Jeff stated that "she was into Lincoln Logs so it didn't work out." Heeee! Jarad won (anchors were the judges but it was just for fun).

Email ThisBlogThis!Share to TwitterShare to FacebookShare to Pinterest
Labels: Me Me Me, Model Builder Search 2006, News